Warning: count(): Parameter must be an array or an object that implements Countable in /home/pg6qc4bj6upt/domains/sessionrocking.com/html/wp-content/themes/milli-02/ebor_framework/metabox/init.php on line 752
 Gran Miércoles | Hurricane Marie Hearts The Wedge | August 27th, 2014 | Session Rocking

You all heard it like I heard it – Surfline was predicting 14′-16′ sets at the Wedge in Newport. People were stoked… Monday people were talking about it – “Yo, you hear? Shiitake is hitting on Wednesday; supposed to be monster. Mexican hurricane I guess. Odale!” Calendars were consulted, events moved, phone calls handled, camera gear checked the night before…

I called a couple of friends to see if they’d join me… Called Mike Postil and he was like – “How are you planning on getting down there?”

Me: “Gonna drive like the other people and then use my local mojo/Californian drive science to get right next to the shish kabob… I have my Mother’s parking karma; hasn’t failed me yet… but, if traffic gets gnarly, I’ll just park and jog the rest… whatevers…”

MP: “Cool. Or you could park at my house on Lido and take Braden’s bike and cruise that way. Whatever you want.”

6:45AM Wednesday morning. I get up. Kids got to get to school. Breakfast, “Are your clothes on yet? Yo, get your clothes on, we’ve got to get out the door!” Daddy barking, Mom shooing… I started thinking about my CF cards; I only had 48GB to work with. Don’t laugh; I know that is a lot, but I was planning on being gone all day at the beach, shooting like crayzee. I knock on my neighbor’s door; he’s a photog; Mrs. answers – “Oh. shoot! Chris would totally hook you up but he took his gear to work today.” Bummers for him anyway; he’s not going to the Wedge like I am. I still need another card or two. I’m getting card anxiety and it’s not even 7:30AM yet…

I check my iPad just to make sure the surf is still comin in hot and – what’s this!? 20-25’?!!?! Oh Sheeeooot! YEAH!!!!!!!!! So stoked! I shout and my wife, is like “What!?” I give her the good news and she knows I’m gone now… kids off to school and off we go… a good Dad would have pulled his kids from school to take them along but I didn’t want any distractions. No people to be like “Wow. This is cool. You feel like cruisin’ home now or what?” None of that. Kids. Go to school.

9:00AM Headed in to the office in Monarch Beach. Tapped out an email to 400 or my co-workers that I love. Told them to drop it all and head to the Wedge for the spectacle. Rare surf in town, folks. I also managed to hit 400 of them up at once for any CF cards they might want to loan me for the afternoon… a couple came through.

9:35AM Booked north on PCH and was coming through stop and go traffic in South Laguna when all of a sudden I was slammed forward into an intersection… I didn’t know what to think… windows were down, music was boomin… the car is one a them fancy autos, so it must have been some earth shattering event. Or really cool song. Or. Some freakin dude that just slammed into the back of my car! Bust! Punk! We pulled over; I surveyed the damage, shook hands furiously, traded paperwork, told him no biggie, thanks-gotta-go-now-please and took off again, cursing and laughing…

10:15AM I swung into CDM and picked up a card from an associate and then surfed the traffic through the Miracle Mile in Newport. As I got to the underpass that swings you up and over the bridge to the Peninsula, traffic was just stopping. Ouch. All the mojo and science I had wouldn’t overcome a standstill miles and miles from the main event. What was a ninja to do?

11:10AM I merged left left left and zipped over to Lido… pulled up, found the last parking spot on the island and grabbed the cruiser. A grade-A bitchin’ black cruiser with a basket, a light and a bell… I peddled like mad… the wind in my face, my tripod in the basket and a giant stupid grin plastered across my face… I could hear the surf from Lido; it must be huge I thought… I hadn’t been on a bike in Newport since forever… I’ve got to tell you – you need to do this. Bike around Newport sometime… it was fantastic. Who knows, maybe it was just that I was weaving in and out of stopped traffic, other people were smiling as much as I was or it was just that incredible vibe in the air… whatever it was, it was magic… I carved to Destination Wedgetastic.

The sea spray pushed through the houses as I rode the last blocks to the tip of the peninsula. I locked up at M Street, put my sandals in my backpack and hit the sand. The crowds were bigger than I had ever seen… made my way to a point that sticks out opposite the jetty that lets you get good looks into the barrels…

The conditions were amazing; relentless towering mountains of water roared & thundered, crashed and shook the sand. The water spat & swirled with riptides & currents and you were sure the Kraken was going to arise just to up the ante. The lifeguards threatened all who entered and assured them death; told them they would not come and save them, though they would and did.

A select few – some old with wrinkled bronze bodies, large bellies & small shorts and others as you would expect with muscles undulating under skin – assailed the sea, eyes ablaze with some unknown stoked fury & all with maddening grins. Most made it outside though a few were spat unceremoniously back on the sand, the taste of the fool an unfit place in that churning maw. The thousands gathered to watch swapped stories of caution about the sea, but all tales eventually were drowned quiet as larger legends were writ live.

I waited until the sun sank behind me, surfers still charging the grim green and blue and people still roaring with approval as death was cheated again and again. I was sure such a spectacle had never played out before Nero.

7:30PM I rode home at the end of it all on the bike loaned to me by my buddy; the light and bell became my fast friends in the gloaming. I brrring-brrring’ed & pedaled my way through the throngs, headed back to my car… a sliver-thin crescent moon sat above the piers and the waves continued continued continued to pound the shore sending up their warm sea mist, softening everything at the end of a long day’s dream.

Be sure to check out the galleries of pix; links are down at the bottom. Here are a couple of the standout photos: 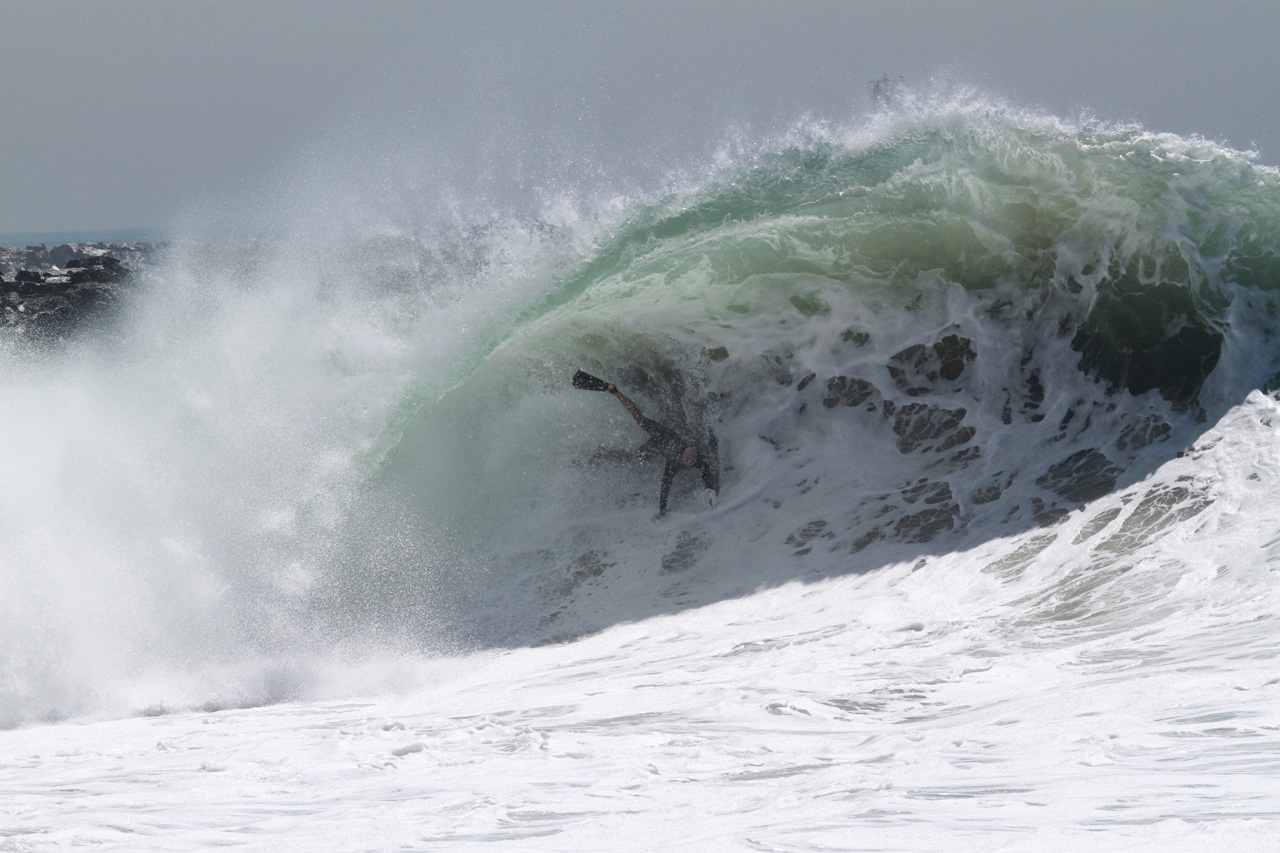 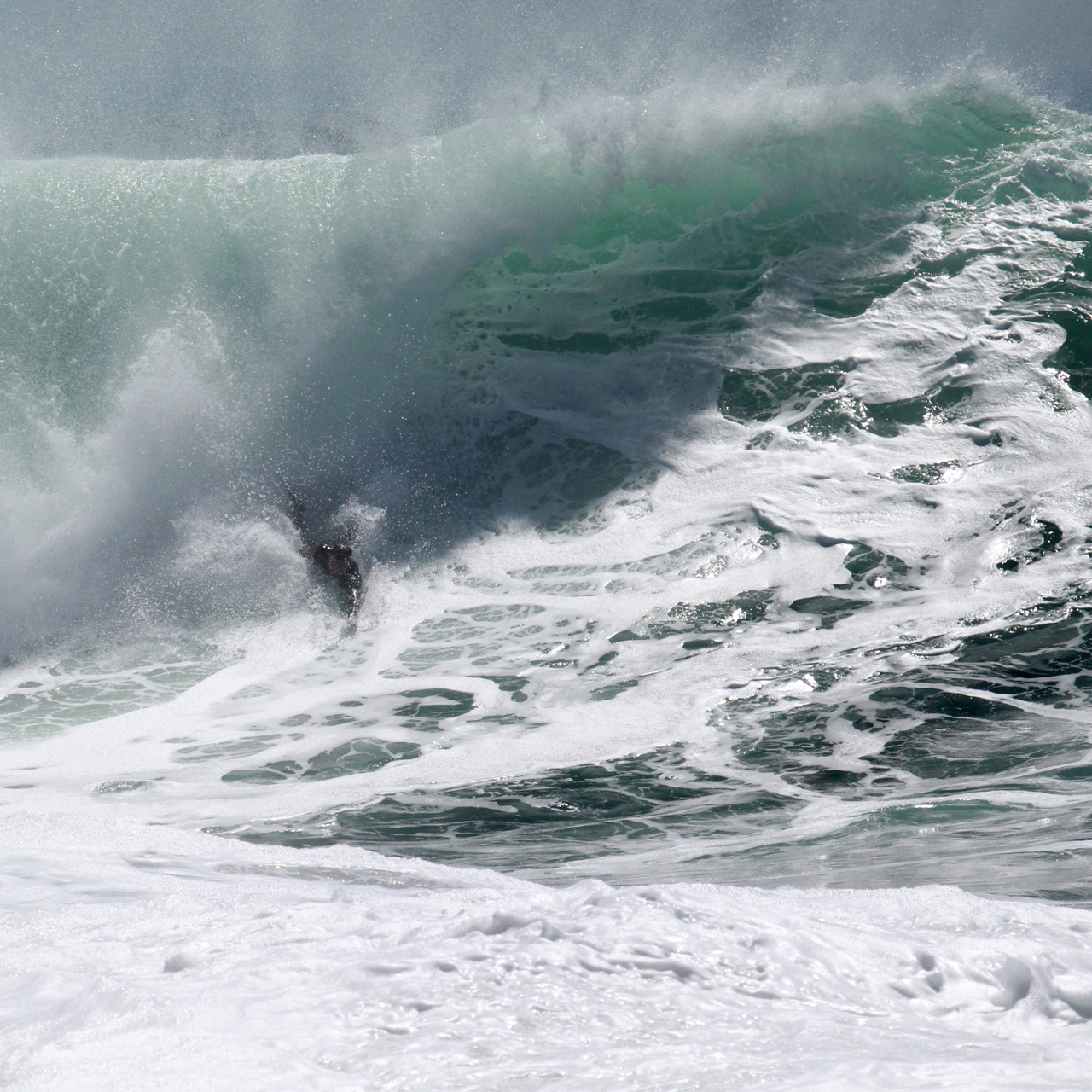 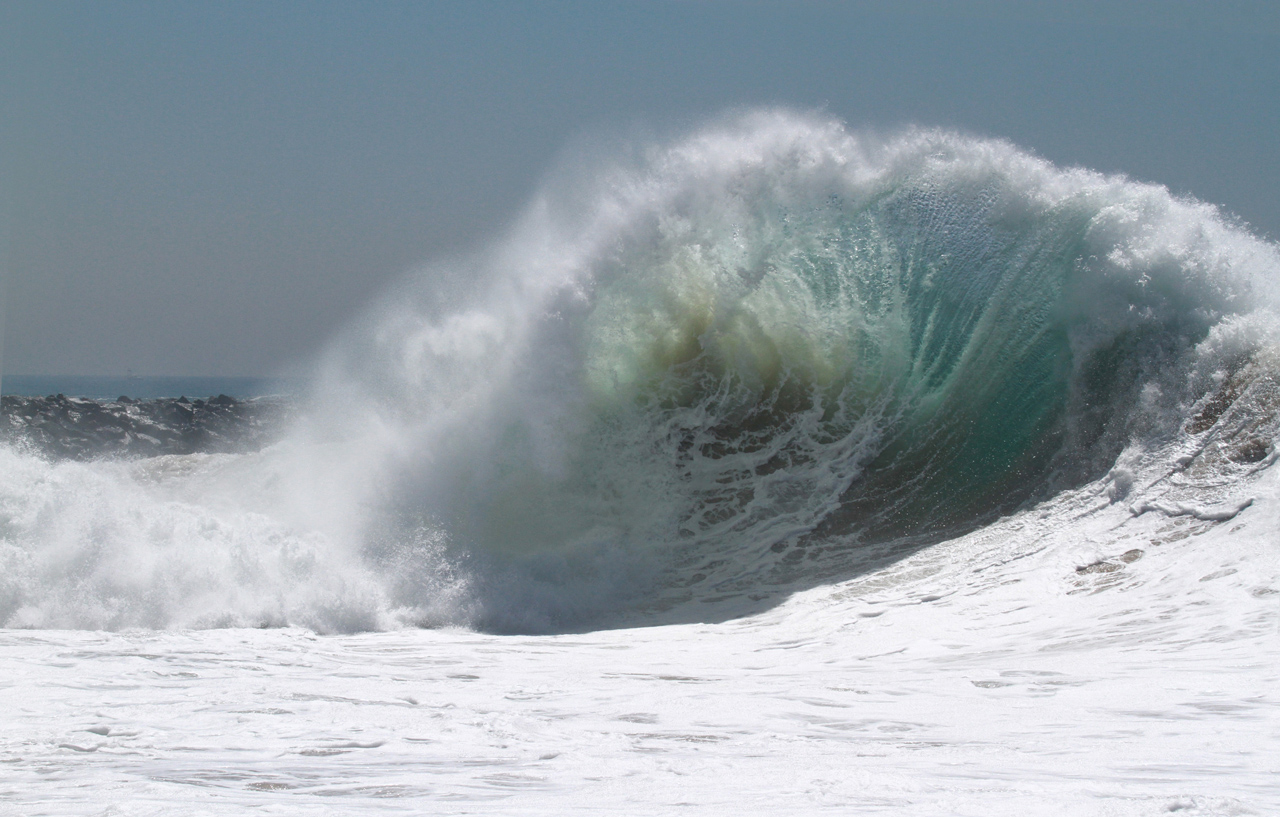 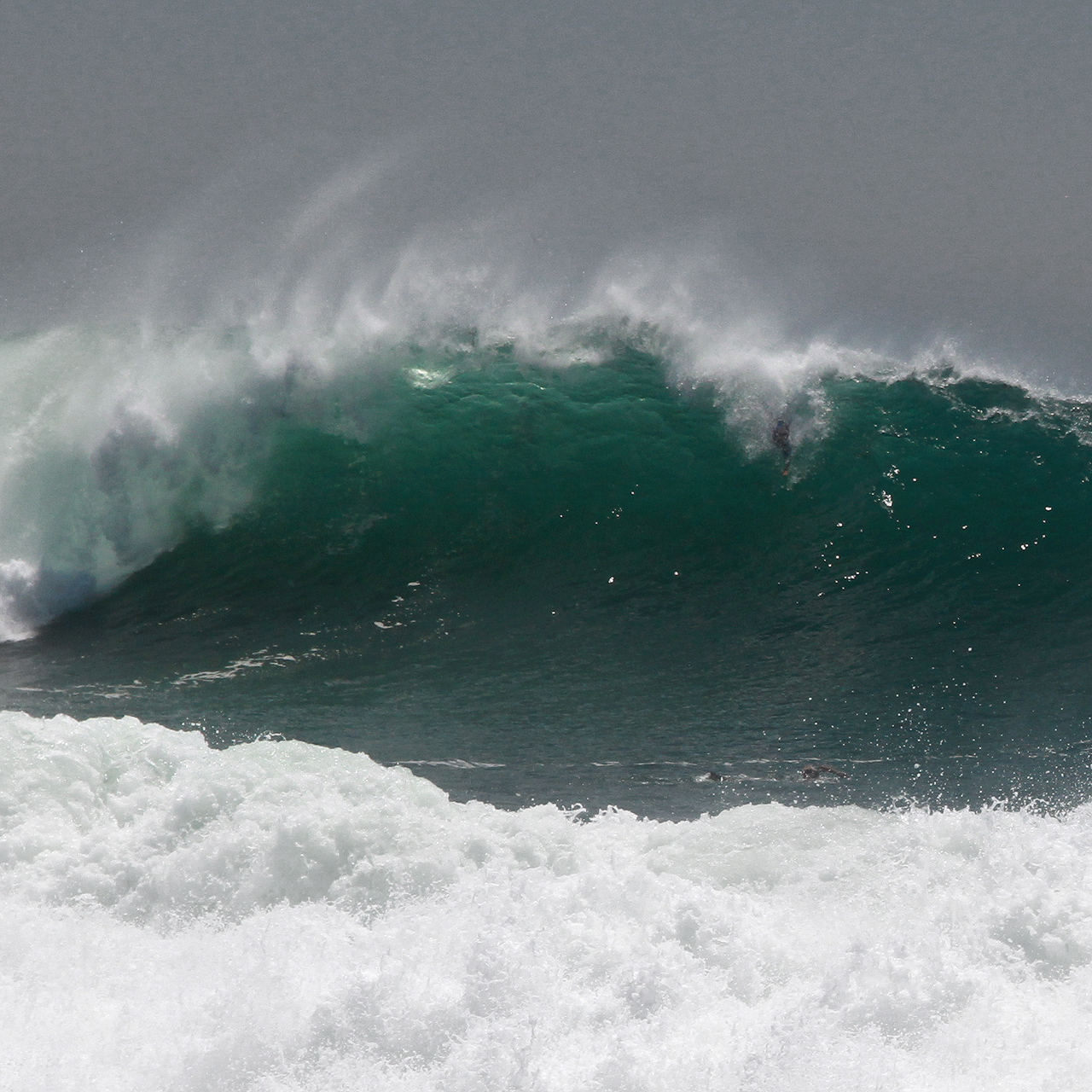 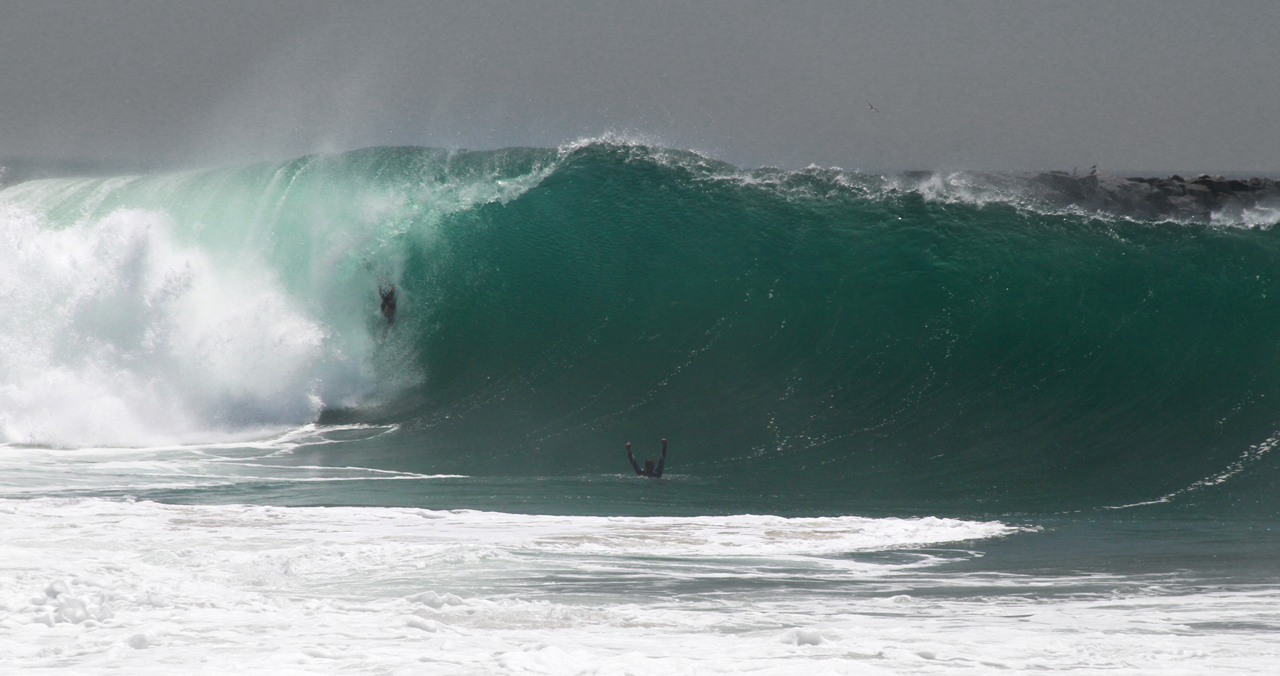 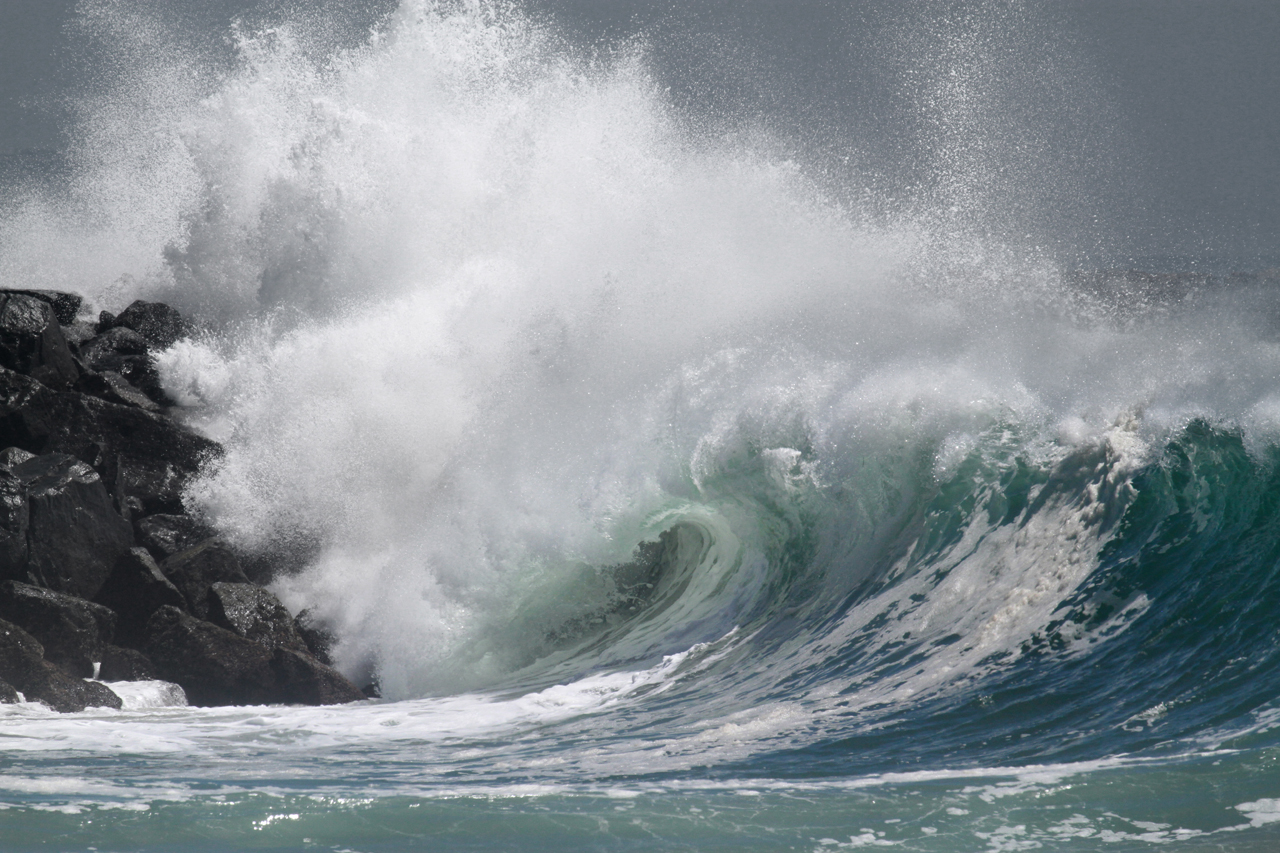 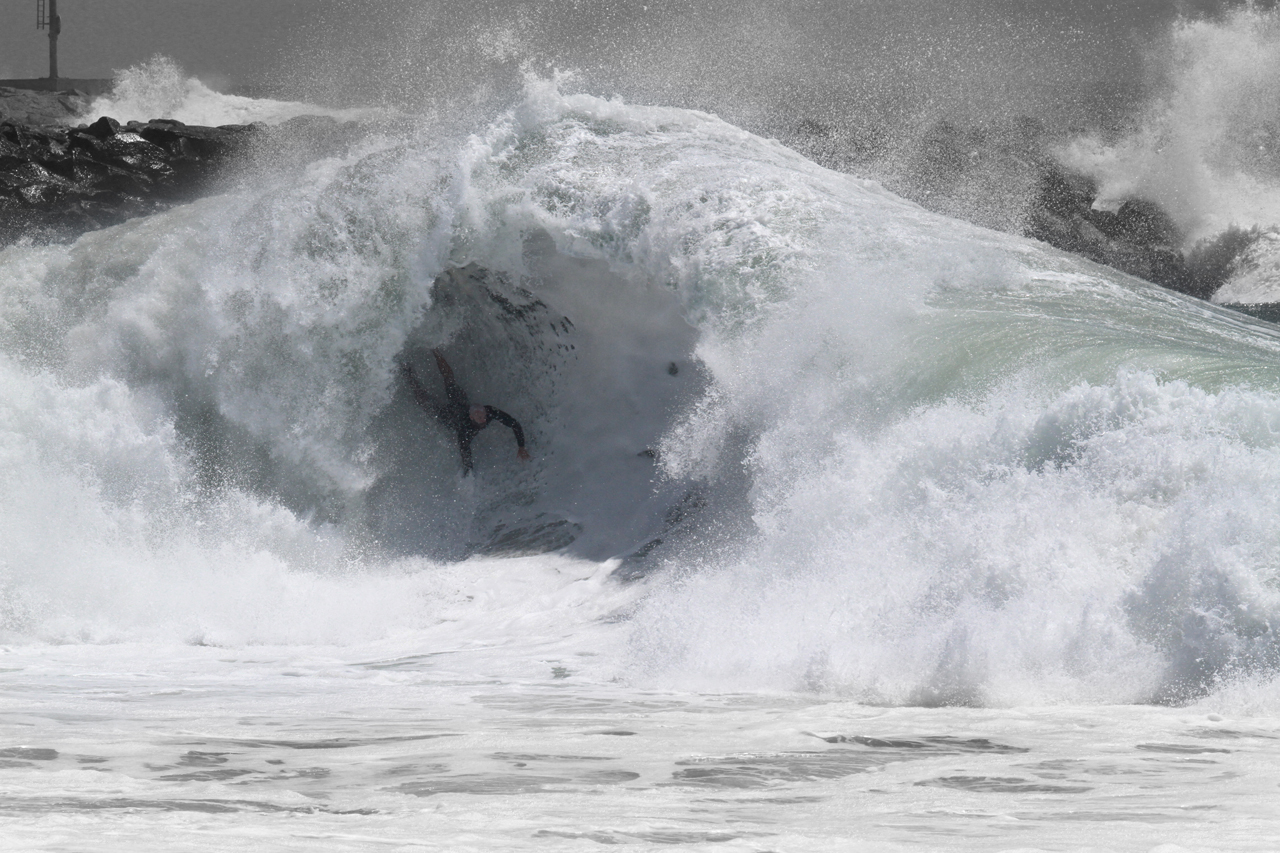 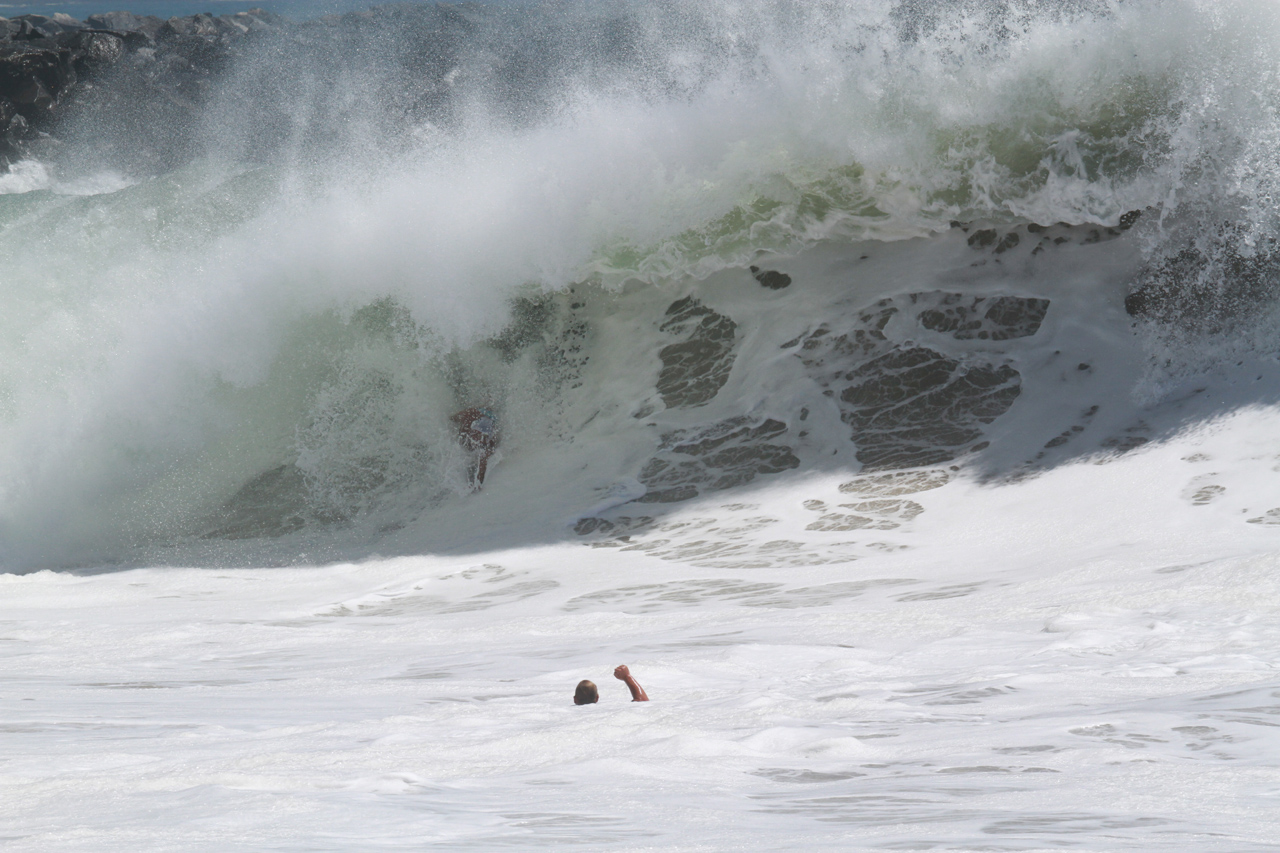 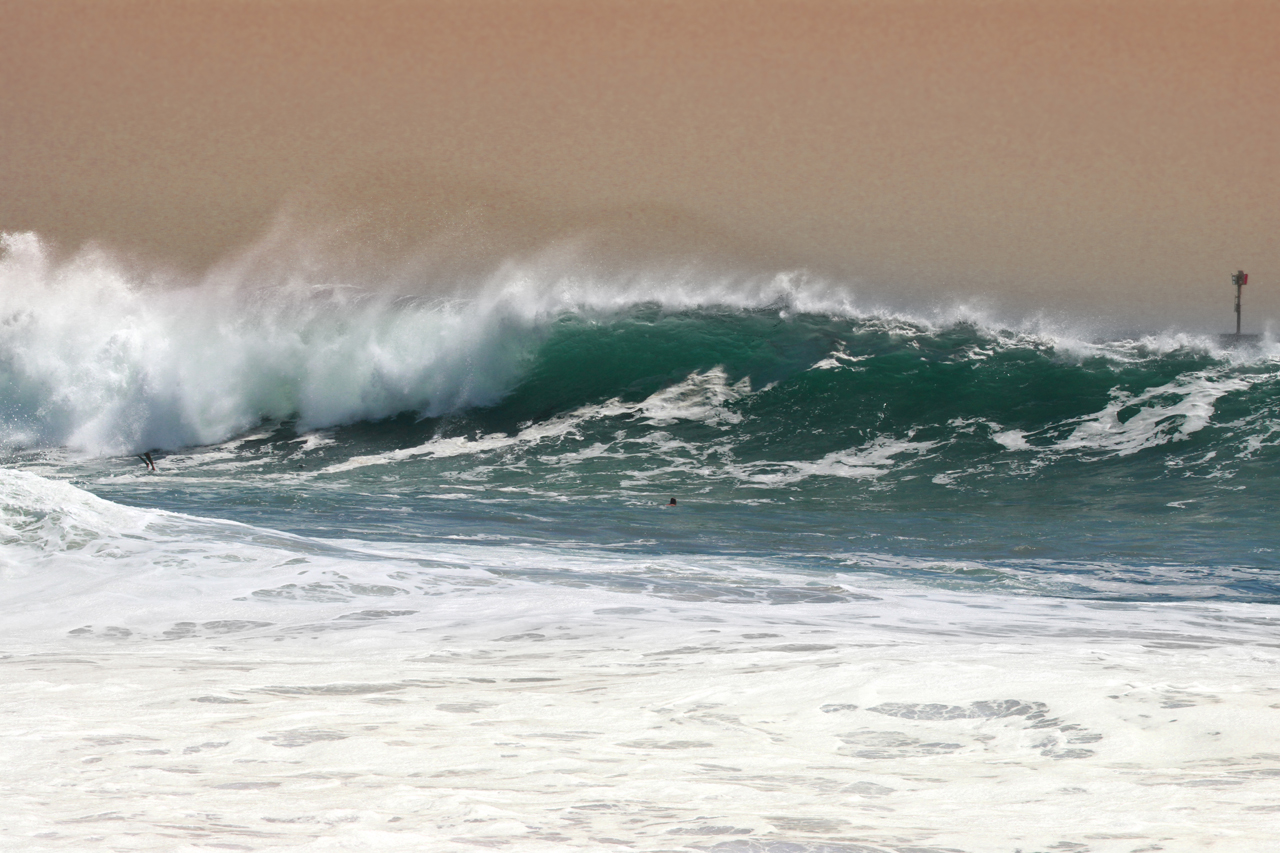 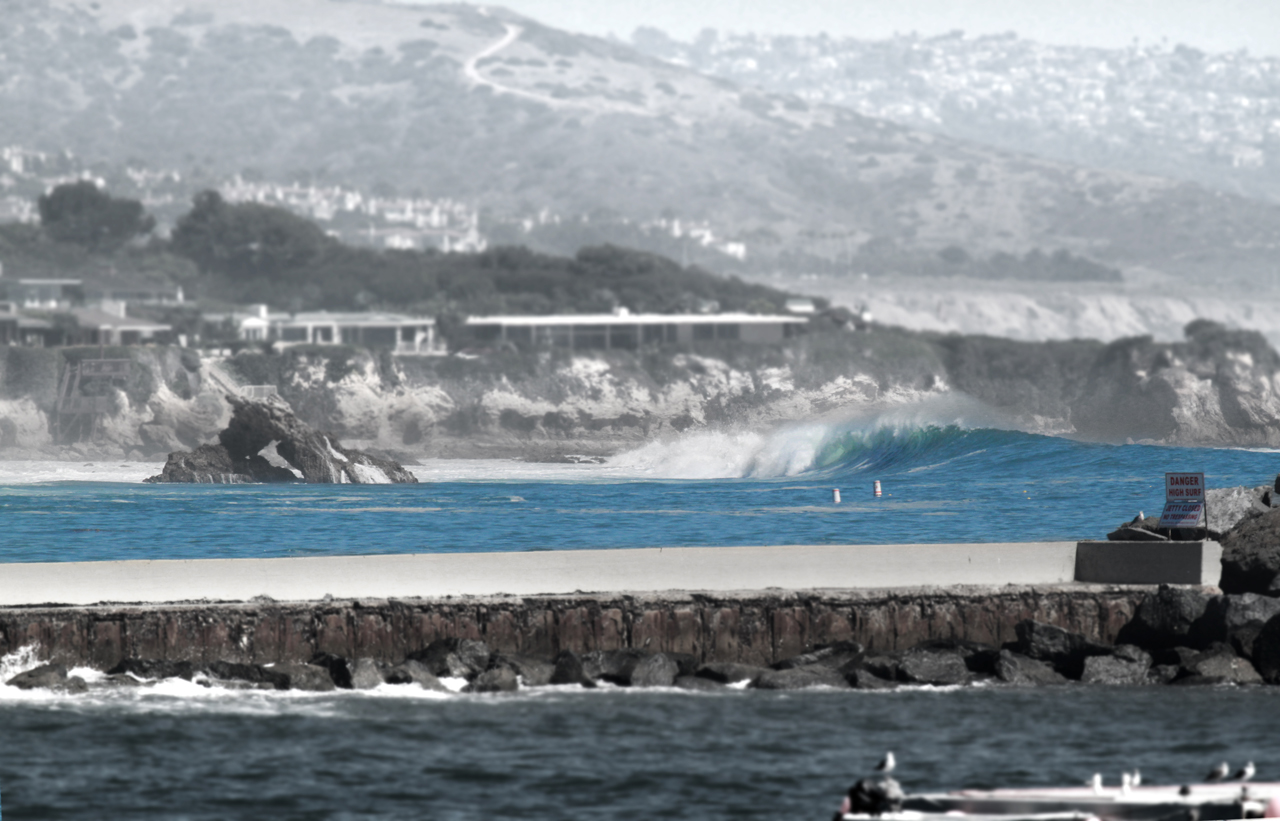 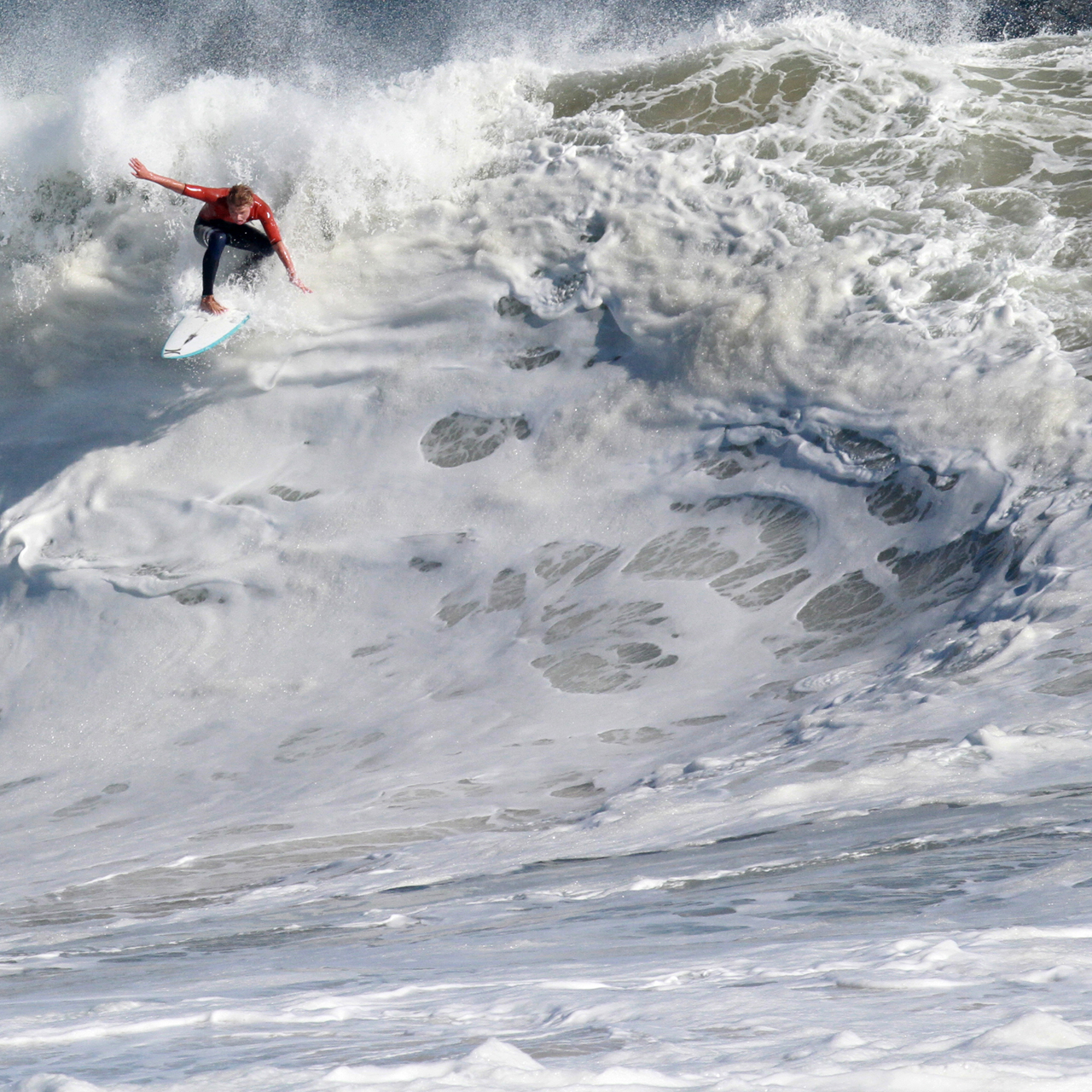 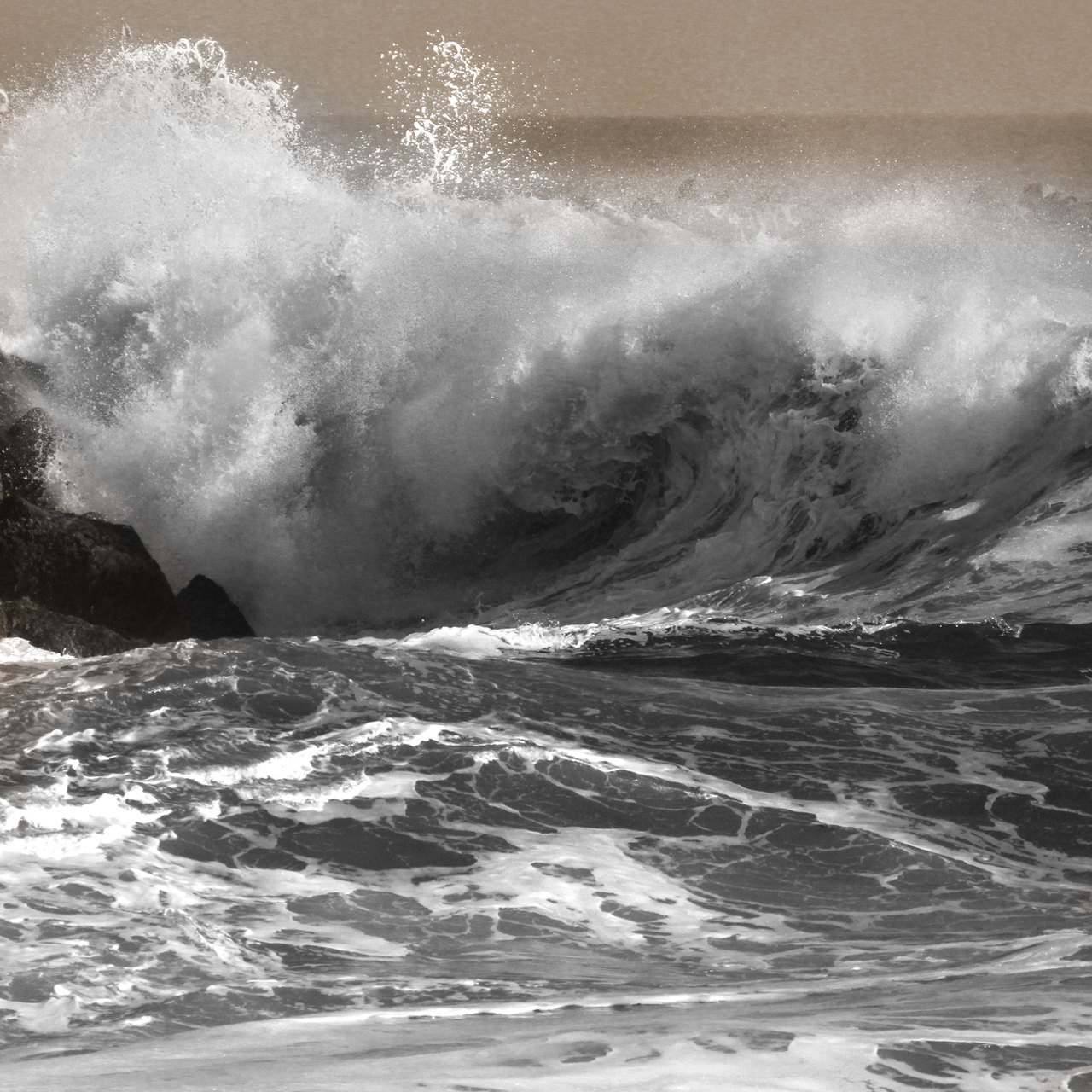 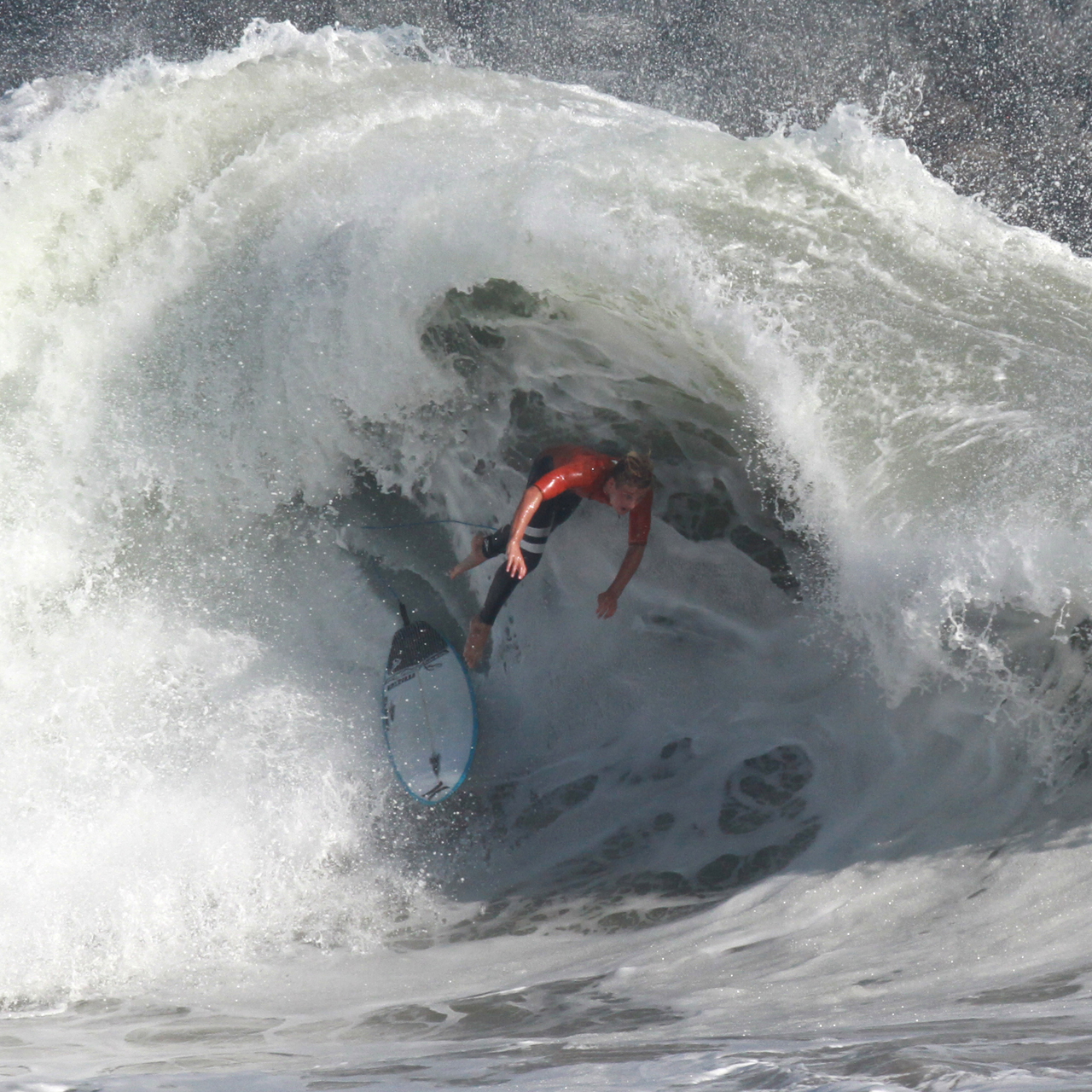 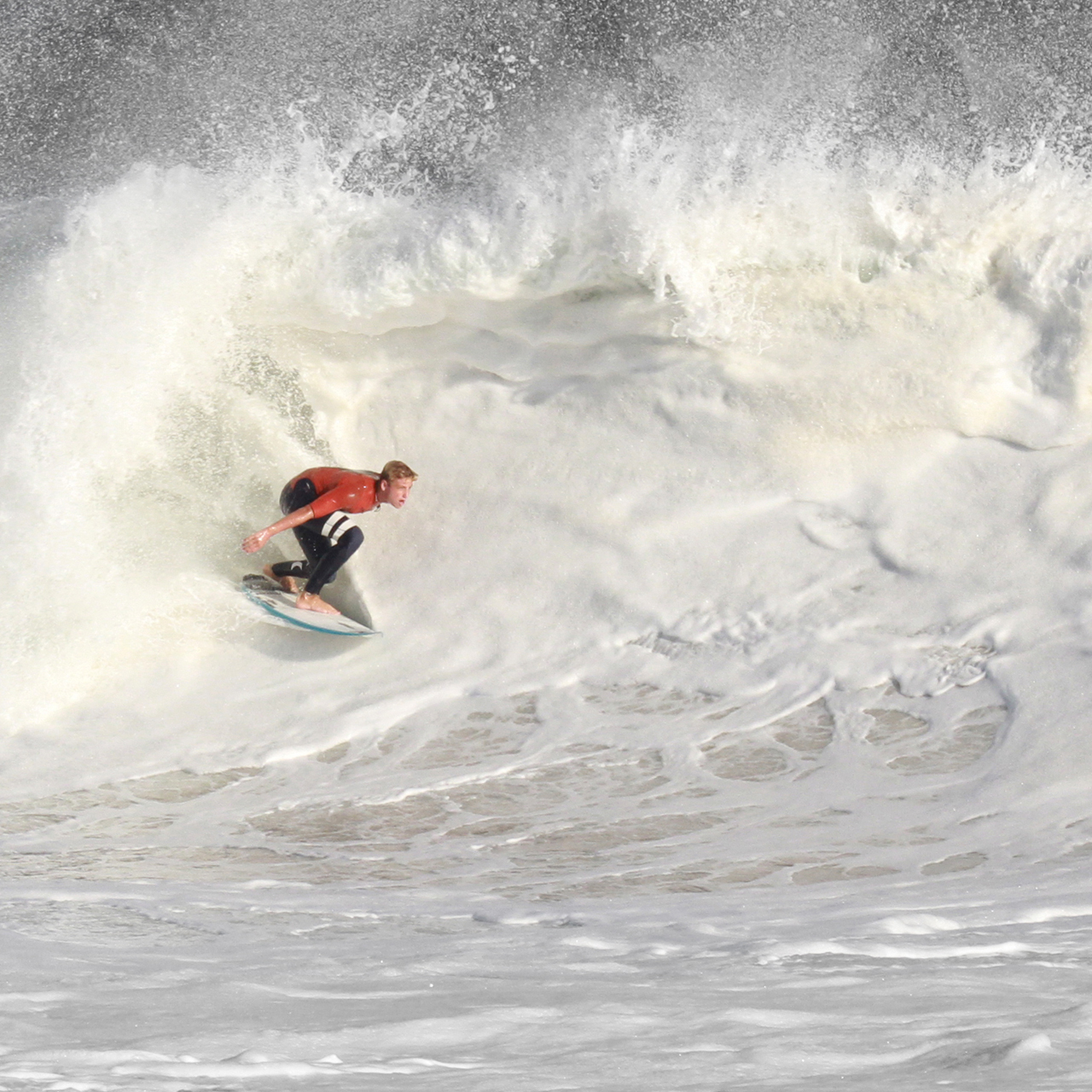 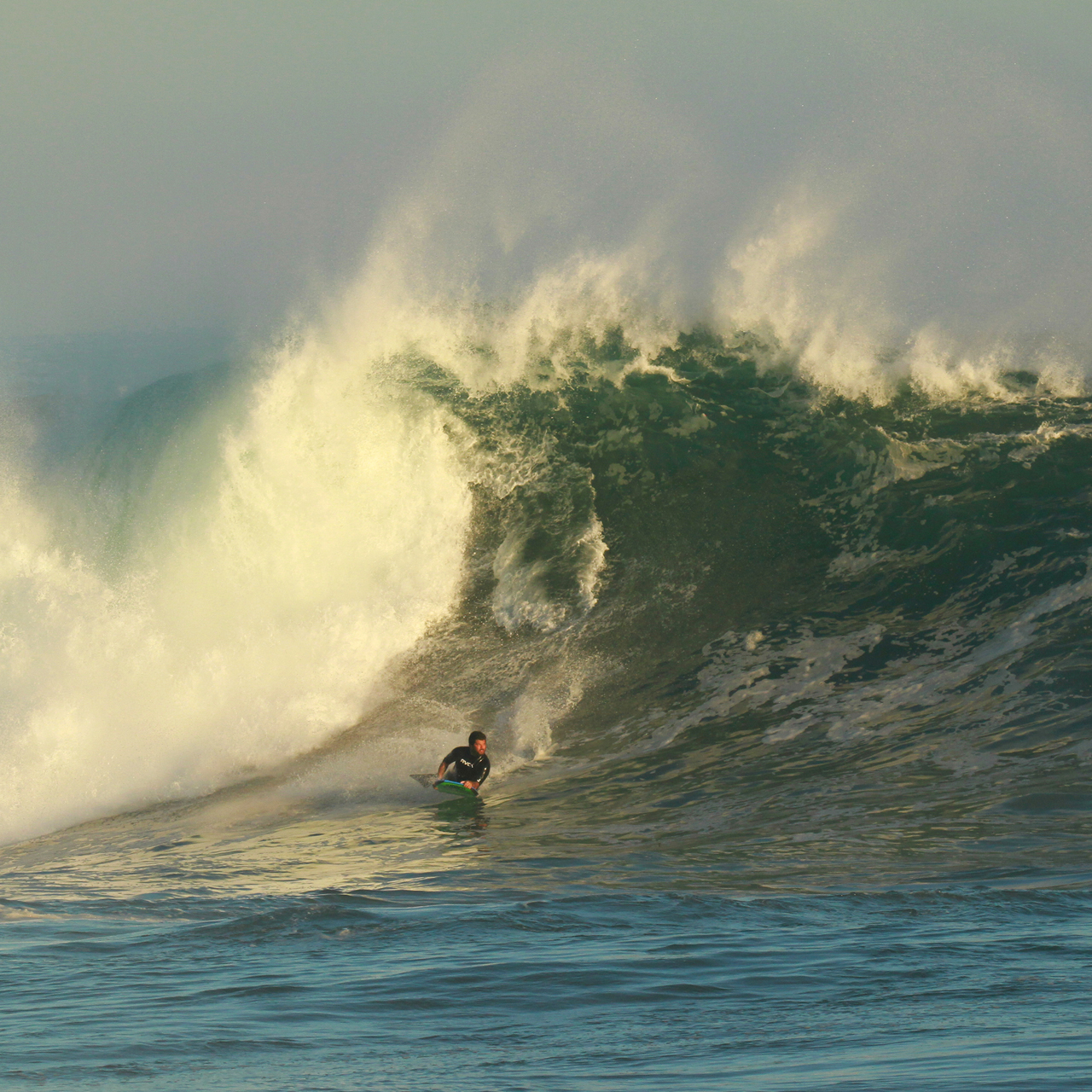 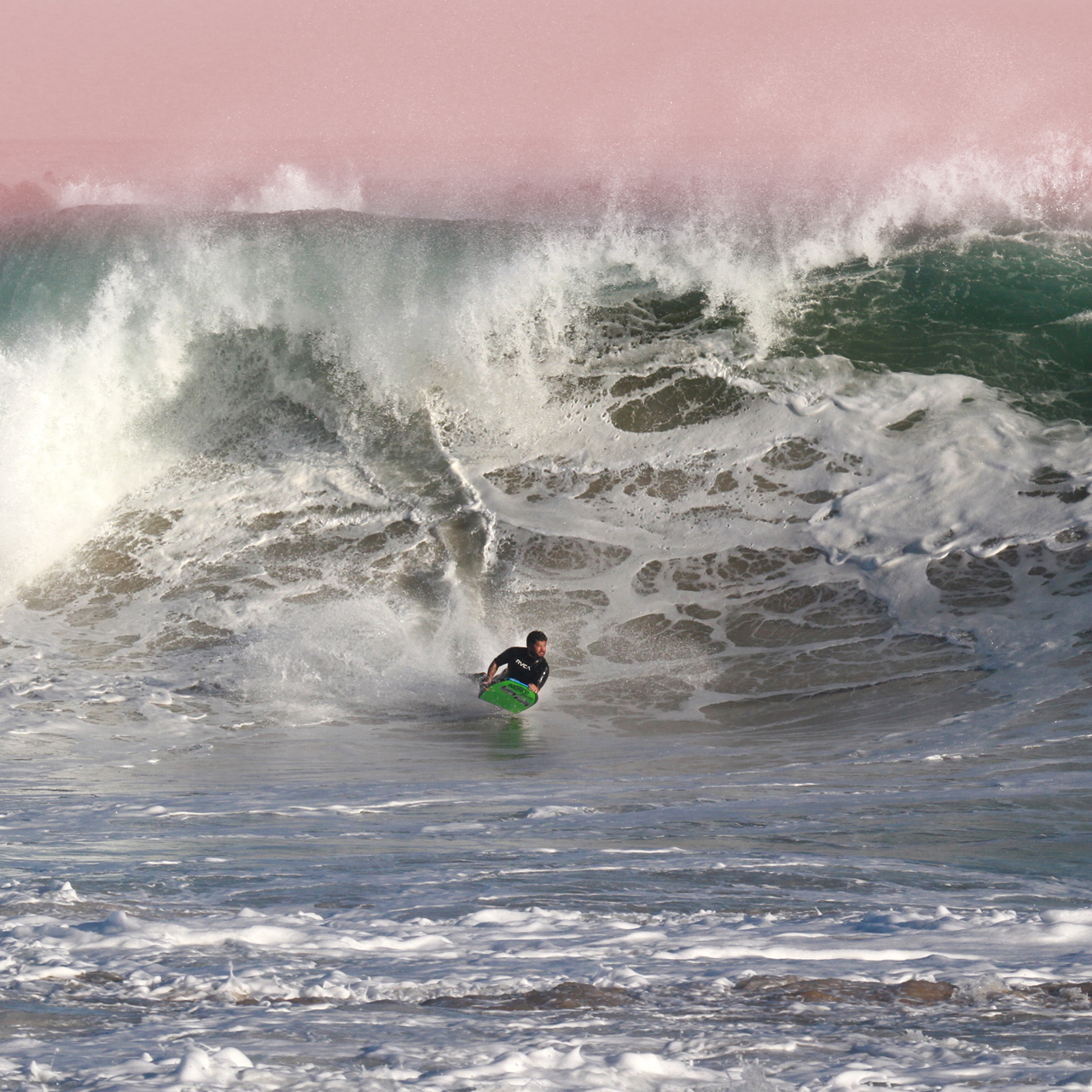 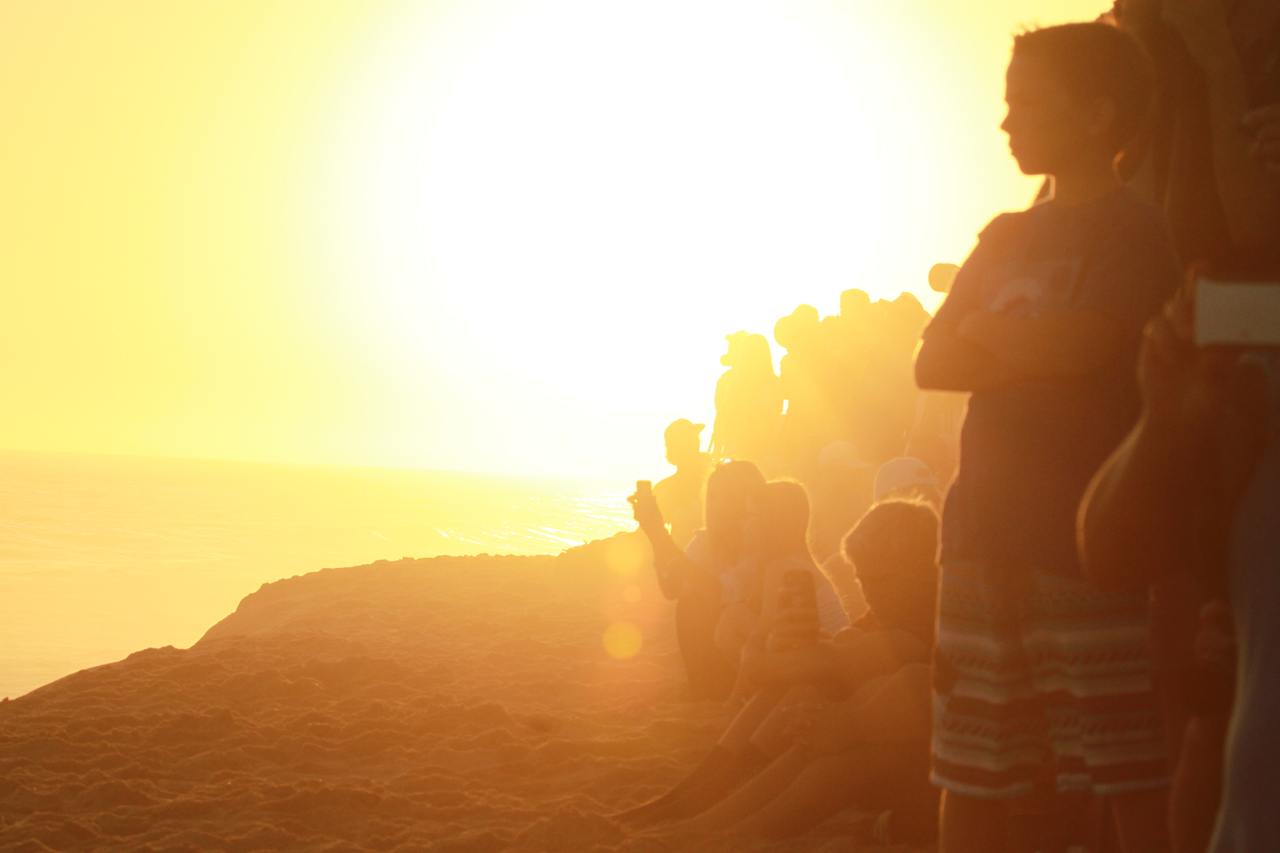 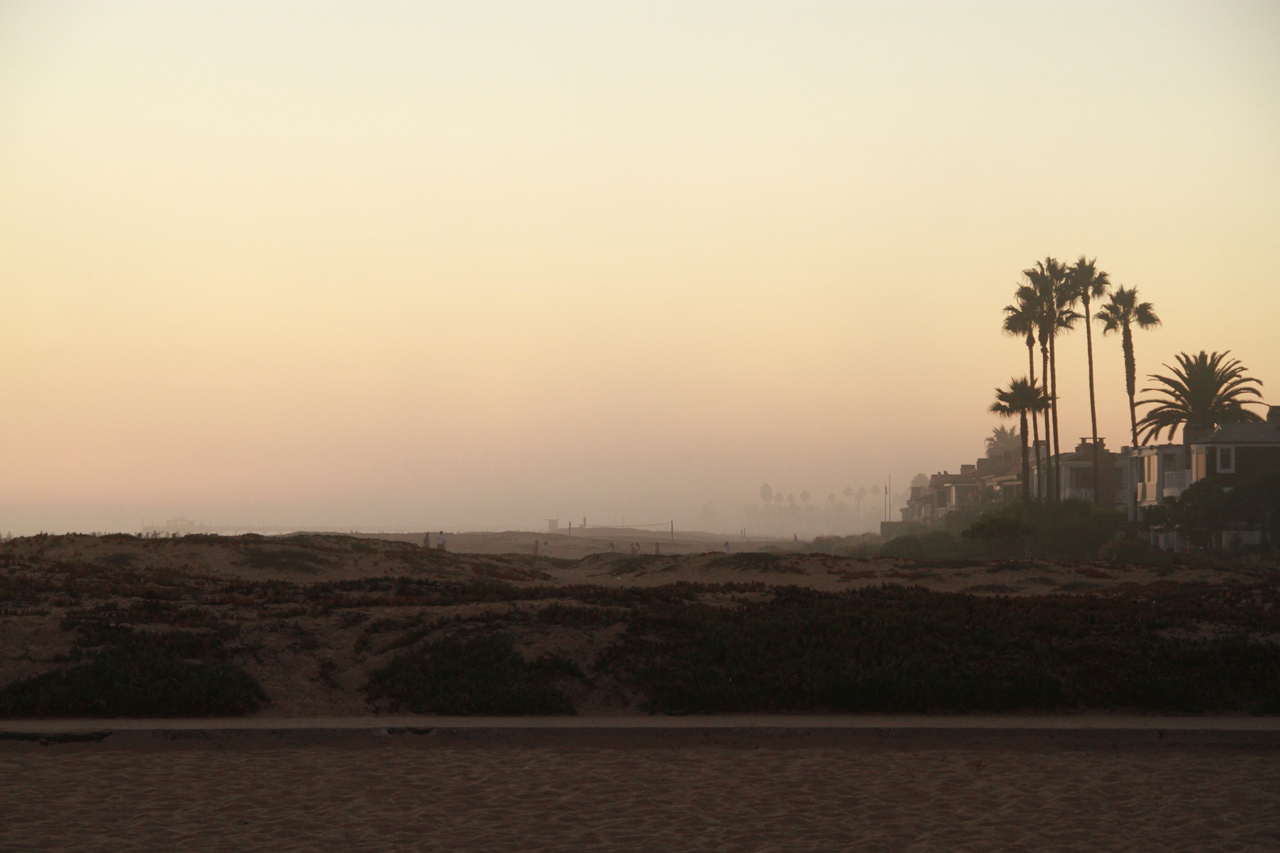 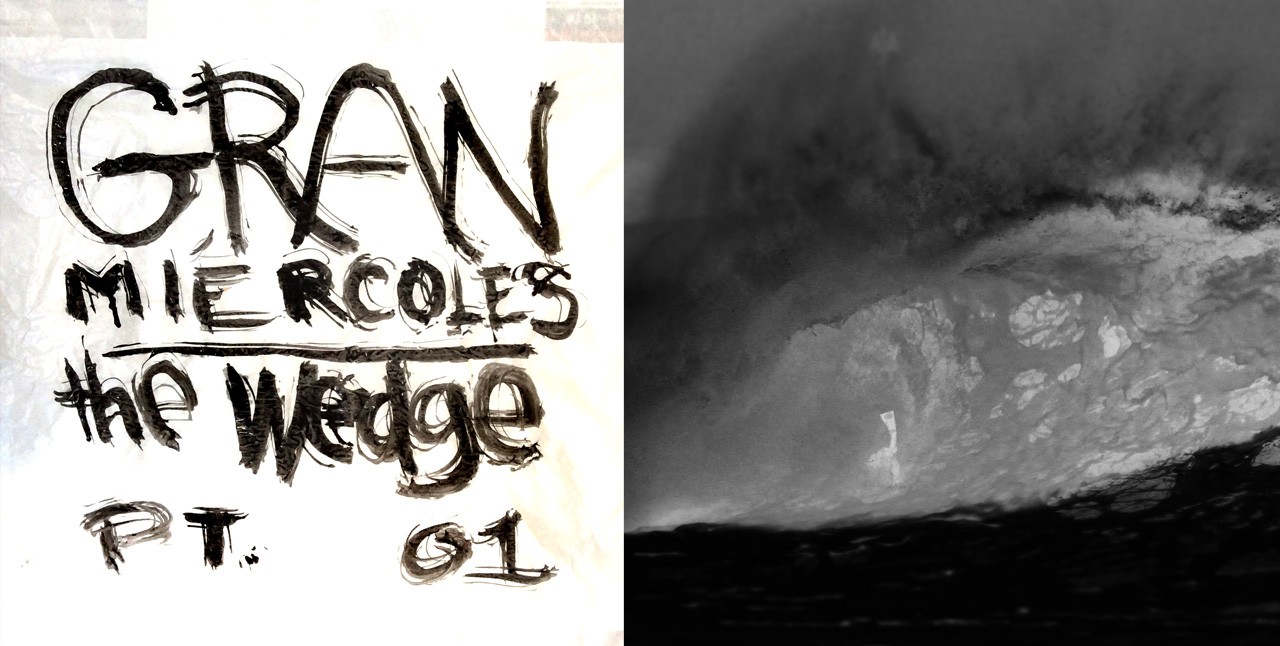 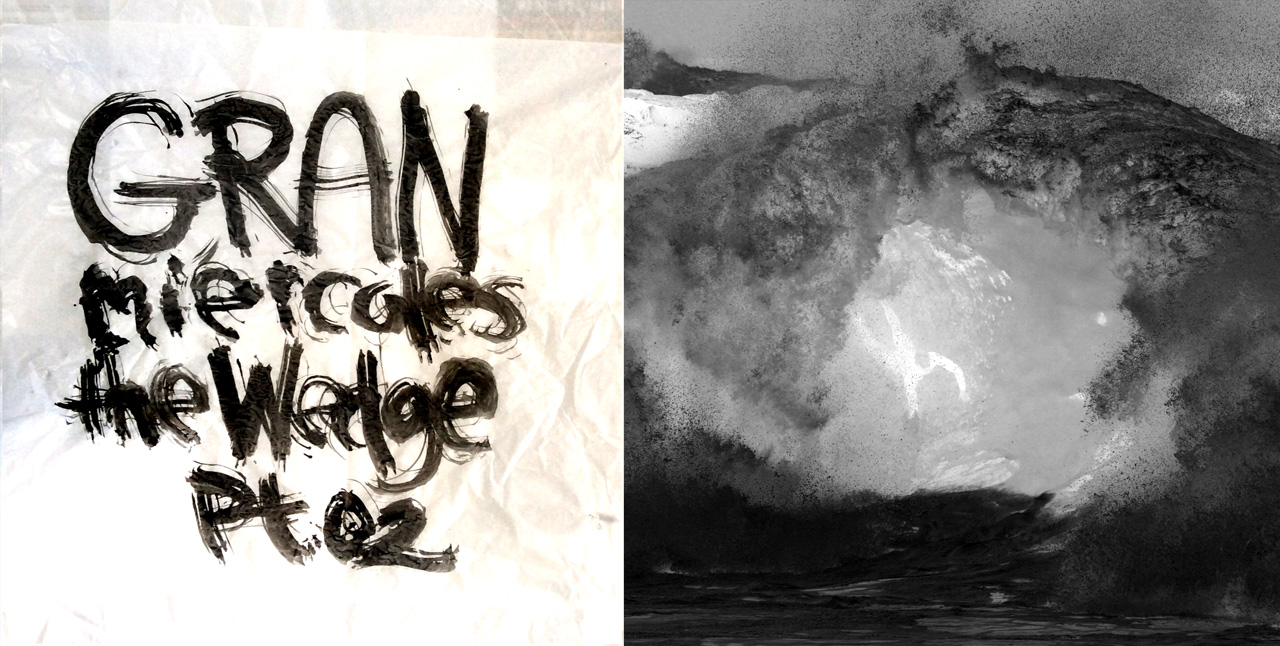 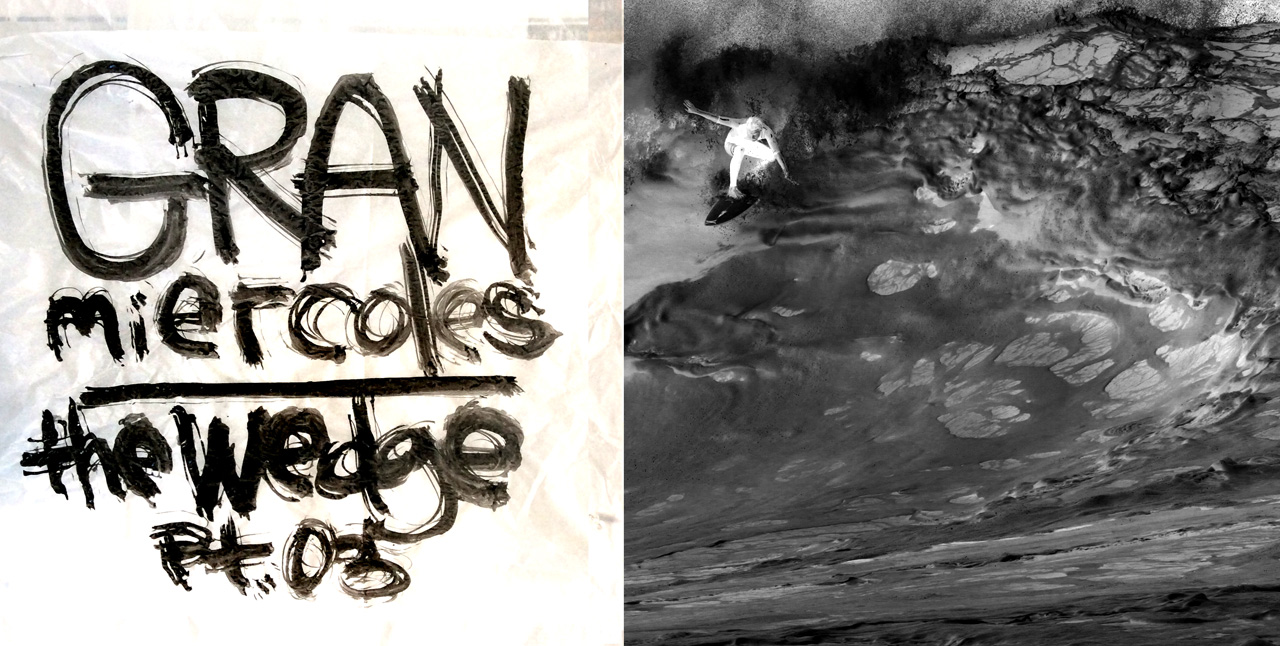 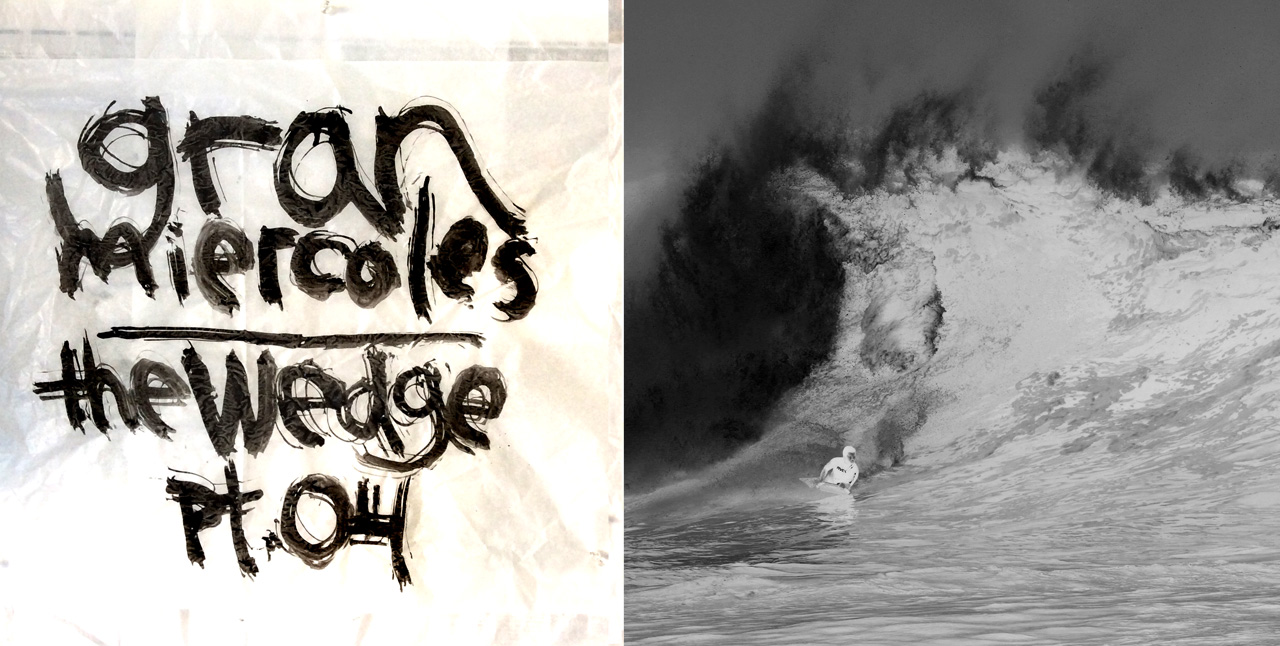 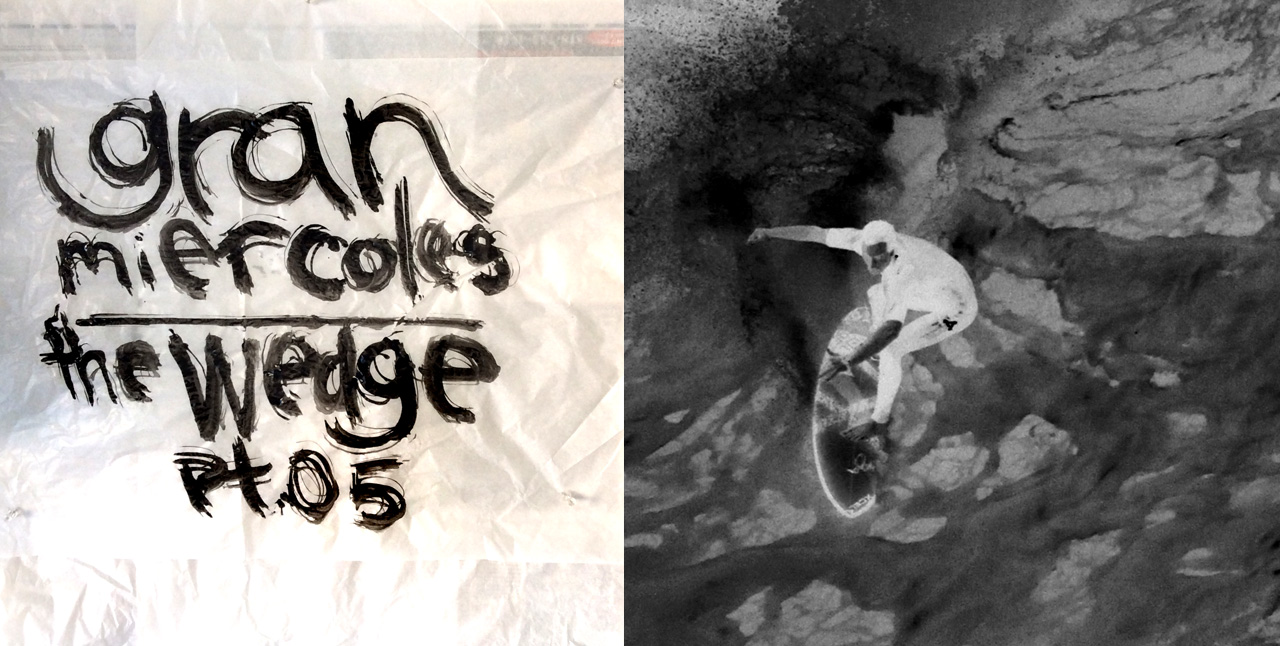